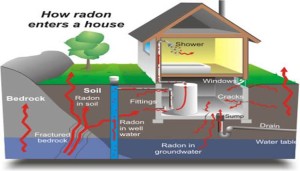 Radon is a chemical element with symbol Rn and atomic number 86. It is a radioactive, colorless, odorless, tasteless[2] noble gas, occurring naturally as a decay product of radium. Its most stable isotope, 222Rn, has a half-life of 3.8 days. Radon is one of the densest substances that remains a gas under normal conditions. It is also the only gas under normal conditions that only has radioactive isotopes, and is considered a health hazard due to its radioactivity. Intense radioactivity has also hindered chemical studies of radon and only a few compounds are known.Radon is formed as one intermediate step in the normal radioactive decay chains through which thorium and uranium slowly decay into lead.

Thorium and uranium are the two most common radioactive elements on earth; they have been around since the earth was formed. Their naturally occurring isotopes have very long half-lives, on the order of billions of years. Thorium and uranium, their decay product radium, and its decay product radon, will therefore continue to occur for tens of millions of years at almost the same concentrations as they do now.[3] As radon itself decays, it produces new radioactive elements called radon progeny (formerly called daughters) or decay products. Unlike the gaseous radon itself, radon progeny are solids and stick to surfaces, such as dust particles in the air. If such contaminated dust is inhaled, these particles can stick to the airways of the lung and increase the

risk of developing lung cancer.[4] Unlike all the other intermediate elements in the aforementioned decay chains, radon is gaseous and easily inhaled. Thus, naturally-occurring radon is responsible for the majority of the public exposure to ionizing radiation. It is often the single largest contributor to an individual’s background radiation dose, and is the most variable from location to location. Despite its short lifetime, some radon gas from natural sources can accumulate to far higher than normal concentrations in buildings, especially in low areas such as basements and

crawl spaces due to its density. It can also occur in water where the water comes from a ground source -e.g. in some spring waters and hot springs.[5] Epidemiological studies have shown a clear link between breathing high concentrations of radon and incidence of lung cancer. Thus, radon is considered a significant contaminant that affects indoor air quality worldwide. According to the United States Environmental Protection Agency, radon is the second most frequent cause of lung cancer, after cigarette smoking, causing 21,000 lung cancer deaths per year in the United States. About 2,900 of these deaths occur among people who have never smoked. While radon is the second most frequent cause of lung cancer, it is the number one cause among non-smokers, according to EPA estimates.[6]